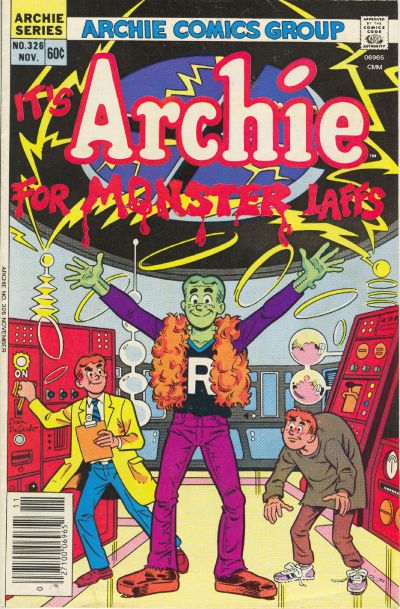 Today, I decided to review a story that’s pretty special to me. It’s the first Cheryl story that I’d ever read (although, technically, it’s an Archie story). It was reprinted in the first digest that my mom ever bought for me. Back then, to my eleven-year-old brain, not knowing anything about reprints or the ages of any particular stories, it was all new to me, and Cheryl was one of Archie’s girls, equal in importance to Betty and Veronica (I didn’t register how Cheryl appeared in only one story).

Unfortunately, Grand Comics Database has no information on who contributed to this story. Not even guesses. Still, that’s not as odd as the fact that, despite the cover, there’s not a Halloween-themed story in the entire issue.

Jason stops by Archie’s house in his blue sports car. His snobby friend, Cedric, is with him. Jason makes fun of Archie’s “boring and ordinary” car, which is actually way outdated for the 1980s. Cedric asks what Cheryl sees in “that townie”. Jason says Cheryl loves “slumming”. Cedric suggests a new paint job for Archie’s car. Jason suggests “something gay-frivolous”. Cedric suggests polka dots. Jason calls him a genius and tears off. He goes to visit “Elmo the Spray Doctor”, a cheap car painter.

At Elmo’s shop, Elmo is confused about the plan. Jason gives him Archie’s address, but Elmo angrily says he’s supposed to bring the car to him. Jason offers up a lot of cash, and Elmo will “do almost anything for money”, so it’s a go. Cedric and Jason have a laugh on the way back to Jason’s car.

Meanwhile, Archie walks out of his house, and Cheryl comes by and greets the “handsome hunk”. He greets her. Cheryl has a lady-boner for Archie. Archie explains he has to take his car in for a brake job. She asks to ride along, and he agrees. He says the service station is downtown.

Downtown, Cheryl spots Jason’s car parked in front of the bijou and guesses he’s taking in a movie.

After they drop Archie’s car off at Sam’s Service, Archie wishes he didn’t have to take a “mighty long walk” back home. Cheryl gets an idea. She explains the movie that Jason’s at is a double feature (so…two movies). How she knows that, I’m not sure. Maybe the bijou is a one-screen theater. Anyway, Cheryl has a set of keys to Jason’s car. Figuring he’ll be in the theater for hours, she decides they’ll borrow his wheels. They go over to Jason’s car. Cheryl curls her arms around Archie and seductively talks about fucking his brains out. An old woman, walking by with a paper bag full of groceries, silently judges Cheryl. Cheryl says she’ll drive back before Jason gets out. Archie says then she’ll be stuck downtown. Cheryl says she has a dental appointment right near the theater. Archie eagerly wants to get home and fuck Cheryl.

On the way back to Archie’s, Archie says Jason’d be hella pissed if he knew Archie was using his car. Cheryl happily says what Jason doesn’t know won’t hurt him.

At Archie’s, they get out of the car. Archie thanks Cheryl and says he owes her. Cheryl wants to go inside and “discuss payment”.

While they’re inside, fucking, Elmo shows up and spray-paints Jason’s car, ridiculing the idea. Oddly, Archie’s garage door is open, just as it was at the beginning of the story. Does he not close it? Also, there are no cars in the garage, so I guess his parents are out.

Anyway, some time later, Archie and Cheryl are making out on the couch, and Cheryl reluctantly pulls herself away to get Jason’s car back.

When they get outside, though, they freak out over the polka dots. Archie guesses they have vandals in the neighborhood. Cheryl says she’s gonna put the car back where she found it and then get the fuck out, and she tells Archie to keep quiet about it. He agrees.

On her way back downtown, a passing trucker stares at the polka-dotted sports car, basically thinking “What the fuck?”

Jason and Cedric leave the theater. Jason couldn’t concentrate on the films, thinking about Archie’s car. He suggests driving by Archie’s and making fun of him over the car. Cedric predicts Archie will be the laughingstock of the town. As soon as they round the corner, though, they’ll come upon a crowd of people laughing at Jason’s car.

This story is pretty funny. It was definitely one of my favorites in that first digest of mine. Cheryl doesn’t come across as a bitch or conniving or anything like that. She’s genuinely likeable. The only “devious” thing that she does is borrow her brother’s car, which she has a set of keys to, so that must have been something that had been part of an agreement, probably set up by their parents. However, I find it awfully convenient that Cheryl had the keys on her right at that moment, when it looked like she was just walking over to see Archie. Still, the story’s good, and I love Cheryl’s ’80s-tastic outfit: dark blue headband; long, yellow, cleavage-revealing shirt; black belt with white buckle; black-and-dark-blue-striped leggings or pants; and similarly-colored shoes (okay, that last part was a bit of laziness on the colorist’s part).

I have an odd note about this story, though. It was reprinted within a longer framing story called “Faith, Hope and Cheryl” in Cheryl Blossom Special #2 in 1995. This was a four-issue miniseries that presented older 1980s Cheryl stories as flashbacks within new stories to introduce/reintroduce readers to Cheryl after her unexpected return at the very end of the “Love Showdown” storyline at the end of 1994 (she’d been gone for around a decade at that point). The odd part, though, is they removed one of Cheryl’s lines: “We’ll fool around”; I guess what was considered acceptable in 1983 and still acceptable in 1990 was considered unacceptable in 1995. How odd.

Tune in next Wednesday!