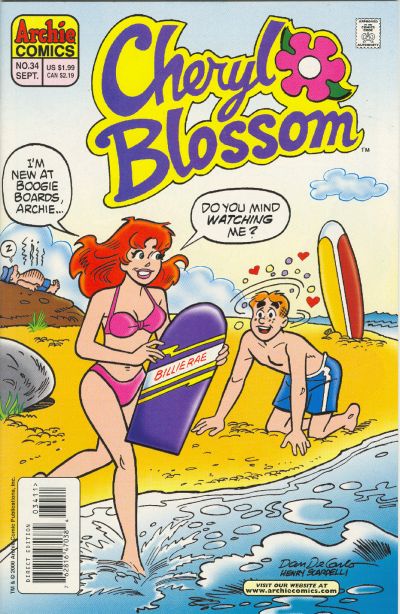 Cheryl and Jason are at the beach. Cheryl’s got her boombox and a music CD and is putting sun block on herself. Jason falls for a girl – unrealistically entirely in the shadows – playing volleyball and asks who she is. Cheryl tells Jason to control himself and is about to say it’s probably Betty.

But then, in shock, she realizes it’s Sabrina, who’s playing volleyball with Betty. Cheryl screams Sabrina’s name out loud, which surely won’t attract her attention (actually, it doesn’t). Jason asks why Cheryl’s scared of a pretty girl and makes a joke. Cheryl says she had a “way weird experience” during their first meeting. Flashback time!

It was during the summer when Jason and their parents went to Italy, and Cheryl went to sleep-away camp. Daaaw, Cheryl was a cute kid. Wait. Her head was wider than the width between her shoulders back then. Where have I seen that before?

Yep, this is a crossover between Cheryl Blossom and Sabrina. Sabrina was Archie’s tie-in comic to the then-recently-ended Sabrina: The Animated Series. You can read all about that here. Anyway, that should make Cheryl around twelve in this flashback. Cheryl was “young and carefree” and “looking forward to roughing it in the wilderness”. The limo drops Cheryl off at Camp Timberlake. Sabrina and Chloe are impressed. The chauffeur (Jamie?) helps “Miss Cheryl” out of the limo. Cheryl introduces herself to Sabrina and Chloe. Sabrina introduces herself and Chloe to Cheryl. Cheryl brought “a wonderful wardrobe of funky fashions” and offers to share them with the girls – while simultaneously insulting their current clothes. Chloe is pissed. Sabrina is surprised. A counselor comes by with the bunk assignments (which Sabrina is unrealistically excited about).

Cheryl, however, brought her own lodgings. Yeah, Cheryl brought a full fucking house (which is just suddenly there). She invites Sabrina and Chloe to stay with her. Sabrina is surprised. Chloe seems suspicious. The camp counselor, perhaps a bit intimidated, agrees to let the girls bunk together.

Later that week, Chloe talks a nervous Sabrina into zapping her hair back to normal (Cheryl had given her a disastrous do after the counselor told her to tidy up). Sabrina is sure Cheryl meant well. Chloe doesn’t think so. Sabrina suggests swimming down by the lake. Before we move on, I need to address the big problem with this story: it’s Cheryl’s flashback, but it frequently breaks perspective, showing stuff that Cheryl never would have been aware of. Honestly, this feels more like a story that should have been printed in Sabrina and guest-starred Cheryl.

At the lake, Cheryl has turned their swim time into a fashion show. Chloe and Sabrina are in disbelief. Chloe is pissed, but Sabrina finds Cheryl’s bikini kind of cute. Chloe says Cheryl’s worse than Gem Stone. Sabrina tells Chloe to give Cheryl a break, saying she’s just outgoing. Chloe goes on about Cheryl and wants Sabrina to zap Cheryl out of here, which Sabrina refuses to do.

Sabrina lectures Chloe about tolerance. Chloe points out that Cheryl is flirting with Harvey (who’s here, too, it seems). Sabrina gets pissed and declares “Cheryl Blossom has to go!!!”

Sabrina, much to Chloe’s amusement, invites Cheryl on a girls-only camping trip tomorrow. Cheryl’s excited for it and gets ready to call her caterers and get a camper. Sabrina puts a stop to that, saying it’s “all arranged”. Cheryl hopes she doesn’t get bored. As Cheryl continues flirting with Harvey, Sabrina says she’ll keep her “amused”. Chloe asks Sabrina what she has planned. Sabrina’s “brewing up” something “spooktacular” for their “redhaired problem”.

The next day, as they’re ready to head out, Chloe says it looks like every boy in camp is “under Cheryl’s spell”. A confident Sabrina says not for long. The counselor leads the girls. The boys says bye to Cheryl. Cheryl passes along a compliment that Harvey supposedly gave her, angering Sabrina. Sabrina zaps a heavy rock into Cheryl’s backpack. Rather than check her backpack, Cheryl walks another mile (35 minutes) with that thing. Once they arrive, the counselor tells them to start putting up their tents.

Even though Cheryl’s exhausted, I guess she managed to put up her tent. That night, while Cheryl, Sabrina, and Chloe (seemingly the only girls there) are roasting what look like large Polish sausages over the campfire, Sabrina suggests telling some scary stories. Cheryl starts telling about a perm that she once got. Sabrina cuts her off and says ghost stories. Cheryl is suddenly tired but agrees to hear it. Sabrina had a “great, great grand aunt” named Samantha (how original) that went to this very summer camp. A redhaired girl stole her boyfriend, and it broke her heart (take a guess as to who the characters look like). In her grief, she ran into the woods and was never seen again.

Cheryl is unsympathetic. Sabrina says the campers reported she still walks these same woods at night and haunts all of the red-haired girls who camp here. As if challenging herself to make this story even less convincing, Sabrina says they say her relative even looks like her. Cheryl doesn’t believe a word of it, says she’s pooped from the hike, wishes them good night, and crawls into her tent.

Later that night, Sabrina astral projects (or something) herself into Cheryl’s tent and scares the shit out of her. Cheryl runs off, declaring she’s leaving. Sabrina and Chloe laugh over this, not caring if Cheryl gets lost or eaten or murdered or whatever.

Back in the present, as she finishes her story, Cheryl tells Jason that, when she sees Sabrina, she gets that same chill and has to “beat feet”. Jason thinks his sis is cray-cray. Cheryl puts on her hat and sunglasses and tries to run away, but Archie notices her and calls to her, angering Veronica (who’s suddenly here as well). Sabrina says hi to Cheryl. Cheryl freaks out and runs off, abandoning her sunglasses and hat. Veronica angrily tells Sabrina that, sometimes, she thinks she’s a witch. Sabrina nervously asks why. Veronica lightens up and says, whenever she comes to the beach, she makes Cheryl Blossom disappear. Sabrina laughs. Archie looks at Cheryl running away.

This story is okay but kind of inconsistent, and I really hate that Sabrina put Cheryl into a potentially dangerous situation. Overreact much?

One thought on “Comics – A Midsummer’s Magic”