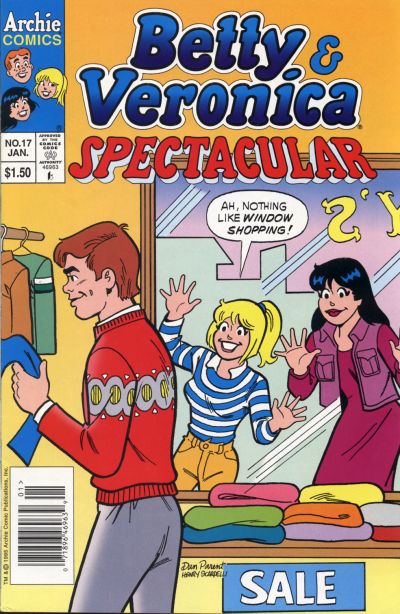 No, the cover has nothing to do with the story, although the situation is similar.

*I don’t have the original issue and am reviewing this story from the PEP Digital #45: The Best of Cheryl Blossom e-book. The credits were removed from the story. The credits come from Grand Comics Database.

Cheryl and Jason and standing around outside with a guy named Adam, waiting for Betty and Veronica to show up. Um, do they know for a fact that they’re gonna walk by this way? Well, they actually do walk by. Cheryl exposits the “battle plan”: Adam is to hit on Ronnie. He’s a model, so Cheryl’s counting on Ronnie to fall for him. Then Jason will scoop up lonely Betty. Then Archie is Cheryl’s with no interference. Jason asks Cheryl what she sees in Archie.

Cheryl isn’t able to offer anything other than “Opposites attract”, which says a lot. Regardless, Jason uses that as the reason why he finds Betty “so intriguing”. Um, that isn’t a word that I’d use to describe Betty. In fact, Betty Cooper is the exact opposite of intriguing. After Ronnie leaves with Adam, Cheryl will show up and talk to Betty to drive the wedge between her and Ronnie a bit wider. Jason salivates at the thought of fucking Betty, but Cheryl tells him to calm the fuck down and says he’ll “comfort the poor girl”. Jason’s all for it.

Ronnie and Betty window-shop at Chez Sweater, apparently a hoity-toity French…sweater store. Ronnie suddenly gets a lady-boner for Adam (who’s in the store), then so does Betty, and they argue over him and race into the store like a couple maniacs, knocking shit over and making a huge mess.

Wait. So was Adam’s plan to just hang out inside the store and hope the girls walk by, peek in the window, and see him? An awful lot of this plan relies on luck. Why not just walk over to them outside?

Anyway, Adam walks over and helps them up. (The manager also storms over, pissed, but then we never see him again.) They all introduce themselves. Adam chooses Ronnie. Betty’s pissed. The girls argue and break up. Betty thinks at least this will free her up for Archie.

Betty goes over to Archie’s house, but Mary informs her that Archie and Fred went out of town to attend a football game this weekend. Betty decides to go over to Pop’s to see who’s there.

Betty sees Cheryl outside Pop’s and asks what brings her here. Cheryl says she saw Betty from her car, and she looked so dejected. Suddenly getting angry, Betty wants to know why Cheryl’s concerned. Cheryl guesses Betty lost her best friend, which hits a nerve. Betty tells Cheryl to mind her own fucking business. Cheryl suggests maybe Betty needs a change.

Cheryl suggests a new set of friends and tries to make Betty question how well that she knows her current friends. She advises Betty to keep her eyes open. Angry, Betty walks away. Cheryl has Jason go after Betty.

Jason catches up with Betty and has her talk with him. Cheryl, looking on, finds it “too funny”.

Cheryl is excited that Archie’s hers and skips away in excitement. A dog thinks she’s nuts.

Adam takes Ronnie to see a movie that Betty had wanted to see. Ronnie (who clearly has blue eyes in one panel) suddenly notices the Pembrooke insignia on the cufflinks on Adam’s jacket. She’s suddenly furious.

She realizes Adam lied to her when he said he lived in Paris (he only visited there once). Ronnie decides Pembrooke = Cheryl and goes to rescue “poor Betty” from Jason, dragging Adam along. She demands to know everything and threatens him with dismemberment by Moose Mason (a.k.a. “The Pulverizer”). Adam spills.

Sitting on a bench, Betty feels better after talking with Jason and warms up to him. Betty’s upset to see Ronnie and Adam approaching. Jason tries to hurry off with Betty, but Ronnie tells her everything. After, no doubt, a fierce scolding, the “brutal” girls send the guys off with a warning to never cross their paths again. Ronnie guesses where to find Cheryl.

At Archie’s house, Cheryl learns from Mary that Archie’s out of town. Cheryl walks away, pissed. A dog gets in her way, and she somehow falls into a mud puddle and gets dirty. Betty and Ronnie show up and witness it, amused. Ronnie suggests they take in a movie. The dog’s also laughing at Cheryl. Jason shows up but doesn’t make an effort to help his sister. Cheryl’s thoughts are censored.

This story was pretty funny but relied too much on coincidence and leaps in logic. Also, it’s worth noting Cheryl didn’t really do anything wrong beyond send a hot guy for Betty and Ronnie to fight over. Which they did. They behaved horribly and broke up. Their problems are legit. They get back together solely because the Blossoms were involved, not because they worked out their problems.