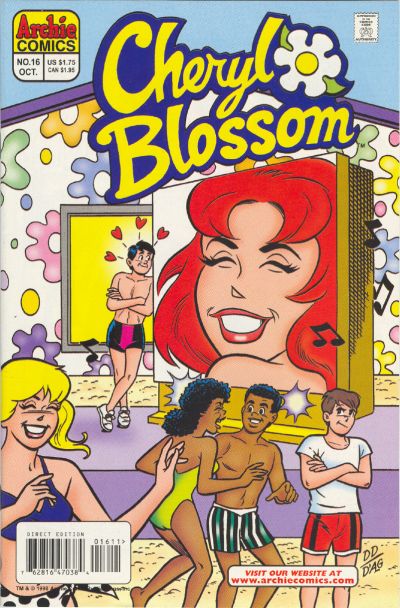 Although I have the original issue, I’m reviewing this story from the digital edition.

Okay, so this is confusing. The full title of this story has “Part 2” attached to it, and the two parts of the story in this issue are labelled “Chapter 3” and “Chapter 4”, respectively. Furthermore, the story title is preceded by “Continued from CHERYL BLOSSOM #15…”. So it’s definitely trying to say this is a direct sequel to “Cheryl’s Beach Bash!“, the lead story in the previous issue. However, the beach bash is in full swing here, and that didn’t start until “Party Hardly“, the second story in the previous issue.

Anyway, everyone’s having a great time, but one of the producers was hoping “more things would happen”. Incidentally, there’s a guy at the beach bash that looks a lot like Kevin Keller – 13 years before his debut. Kevin was created by Dan Parent, who wrote and drew this issue.

The ratings have been okay, but the producer says they need something to “shake things up”. Cheryl has interviewed “the biggest rock stars”, and she’s suddenly interviewing an all-male knockoff of the Spice Girls – just one panel after she’s shown dancing. Sloppy. They’ve had “the best groups” performing live. However, another producer or a network head or whoever says the Pembrooke kids are “sort of boring”. But then “the Riverdale crowd” arrives to “shake things up”. Um, why weren’t they here this whole time? It’s what they were hired for in the first place. The producer exposits about how Mr. Blossom bought the beach and opened it to the public, which we already knew. She also tells the camera operators to “keep the camera rolling” – as if they’d stop.

Cheryl, Betty, Veronica, and Priscilla/Bunny immediately start arguing, but Cheryl then cuddles with Archie, declaring “this townie is mine!” Cheryl introduces America to Betty and Veronica, “pale imitations” of her. Um, doesn’t America already know them from Cheryl’s various movies about herself? Anyway, Ronnie accuses Cheryl of covering up a zit on her cheek, which Cheryl takes offense to and then accuses Betty of having unnatural hair color, which Betty takes offense to. I guess this is what passes for trash talk in the Archieverse.

Betty insists she’s a natural blonde and says Cheryl can ask her mom. The producer asks Archie to tell America what it feels like having three beauties battling over him. He says it’s “actually pretty good!” This divides couples across the country along gender lines, with guys tending to side with Archie and girls tending to side with Cheryl, Betty, and/or Veronica. The “big cheese” at the network calls up the producer to tell her that this is great shit. She says “Because it’s real!”

The producer tells the girls to have a beach volleyball competition. Knockoffs of Jewel and Alanis Morissette serve as guest celebrity commentators. There’s…no sense of pacing in this story. Everything just happens in rapid succession. Anyway, fun fact: Jewel is 9 days older than Alanis. Anyway, Priscilla/Bunny and Cedric are nervous, because they don’t know anything about sports. Bunny hasn’t broken a sweat in eight years. Cheryl has a melodramatic moment with Archie as they stand on opposite sides of the volleyball net as if they’re separated by a fence or something and zzzzzzzzz…

Oh, sorry, I dozed off. Cheryl, Betty, and Ronnie hog the ball and keep hitting each other in the head, not letting the guys (or Bunny) play. Suddenly, something arrives.

It’s Cheryl’s “idiotic brother” Jason on a hang glider with his name on it. Jason admits he’s here to get on TV.

Oh, and to see Betty. He gives her flowers, which he must have pulled out of his ass, because he certainly wasn’t holding them when he hang-glided in. Betty thanks him. Cheryl asks them to take it elsewhere, so the “two rich girls” (herself and Ronnie) can “battle it out”. But then Archie gets pissed at Jason for “barging in” on “his” Betty. Jason calls him out on that – not because it’s pig-headed, but because he has three girls fighting over him, so Betty can’t really be called his. Betty agrees with Jason and goes off with him. Across America, this continues to divide couples.

Cheryl tells Archie that he isn’t worth it and goes for a walk with Reggie. Ronnie rejects Archie, because Cheryl does, and goes off with Cedric. She has to ask his name, even though they’ve already met. Jughead asks what the rest of them (himself, Ethel, Dilton, Bunny, and Sidney) do. Bunny suggests volleyball. So, to be clear, the normally self-centered host/star of this national TV series said “Fuck it” and left (along with a bunch of others), leaving the C-listers to take over.

At Bunny’s instruction, the Pembrooke crowd (which suddenly includes a bunch of random nobodies) plays dirty. They topple the net, which lands on Ethel, Jughead, and Dilton. This turns into a massive brawl. The producer loves it. The switchboard lights up, because “America’s glued to their seats”. Why is this show live? Realistically, that wouldn’t happen. It’d be taped, so all of the dead moments could be cut out, and only the “interesting” stuff would be presented. Anyway, Archie feels rejected. Cheryl sends Reggie off to buy her a snow cone and then gets together with Archie. Cheryl “knew”, if she rejected Archie, Betty and Ronnie wouldn’t want him. Well, of course, that’s how that works, because it’s not like Betty and Ronnie ever show any interest in Archie when Cheryl isn’t around. Anyway, they go for a dip, and Reggie’s upset, because…Cheryl’s snow cone is melting.

Throughout America, buzz about Cheryl’s Beach Bash spreads. Girls take one of the three girls’ sides. Archie is “the man” with the guys. Merchandise with their faces (T-shirts and posters) are being sold. Cheryl, watching a knockoff of Face the Nation (as teens are known to do), is happy that this stupid rivalry has leaked into the political discourse. She thinks they’re “catching on”.

The caption in the final panel says the story concludes next issue, but, again, the very next story in this issue is a continuation of this reality TV storyline, so I’ll be reviewing them in that order.

This story was pretty good, but everything happened way too fast – literally in the course of a single day.

According to Grand Comics Database, either in the middle of or after the story, there is a 2-page “Dear Cheryl” letters column by Sara Algase (not included in the digital edition).